It took nearly a year for Puerto Rico Electric Power Authority to restore power to most of the 1.4 million customers who’d gone dark after Hurricane Maria.  Eleven months after the storm, PREPA proudly announced that only 25 customer premises remained out of service.

Puerto Rico was a sad example of what happens when the worst hits and the distribution system isn’t prepared to take it. “The utility had not kept up with its infrastructure,” says Larry Dickerman, Senior Director of Public Policy for Landis+Gyr. “The condition of the poles, the condition of the guywires, vegetation in the rights of way … all were major factors.”

Dickerman maintains that the number one thing utilities can do to harden their system is “get the trees out of he way.” But this – and other approaches to weather-proofing systems must be done with prioritization and strategy.

Getting junk out of the trunks

Hurricane Katrina brought down 72,447 power poles, according to Department of Energy figures. Add in the 14,817 downed by Hurricane Rita and the approximately 14,000 that toppled with Hurricane Wilma, and you’re looking at more than 101,264 power poles that didn’t stand up to three of 2005’s major storms. How can utilities harden that much infrastructure? Maybe they can’t, but they can reinforce what counts most. 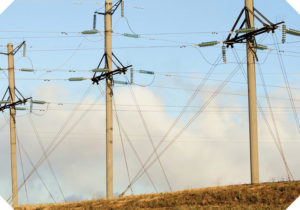 “Utilities really have to think in terms of what they can do to keep the trunk lines – the main lines – from going out,” Dickerman says. “They should at least harden the trunk or main line portions of the system to a higher level that can handle a category high-level hurricane.”

Among the approaches Dickerman sees as vital are adding in high-quality poles, including concrete or steel where necessary, and adding storm guywires to give poles the strength they need.

He specifies guywires because they help support poles in high winds. That’s important, because wind adds significant risk. An article in Transmission & Distribution World noted that risk from airborne debris and from trees outside the right-of-way (ROW) alley “can exceed the risk of trees within the ROW by factors as much as three-to-one or even four-to-one.” Dickerman also recommends guywires for extra resiliency in cross winds. 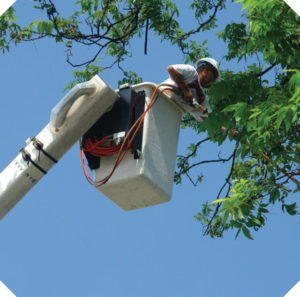 He adds that it’s possible for one tree limb to take out a whole trunk line, but with a hardened system, “maybe you’ve got a limb or two to get off the line or a single pole to deal with. If you didn’t do the hardening, you might have days of work to bring everything back on.”

According to Dickerman, Florida Power & Light took these simple but effective measures to reduce restoration times in their system. “They had events that would normally have taken eight or nine days to deal with and they got them wrapped up in much less time,” he says. 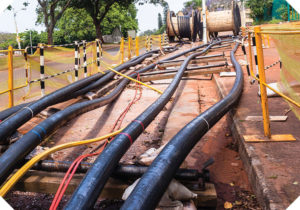 Specifically, FP&L replaced some 40 percent of traditional wooden poles with concrete or composite materials and buried more important lines. Additionally, the utility installed monitoring equipment in key substations to facilitate switching equipment off in the event of flooding, which helps avoid damage.

Weather-related outages have been on the rise in recent years. A report by Climate Central evaluated 28 years of power outage data that was supplied to the federal government by utilities and found that major outages – those impacting 50,000 customer sites or more – increased tenfold between the mid-1980s and 2012. Climate Central’s researchers found that some of this increase could be attributed to improved reporting, however they also note that the average annual number of weather-related outages doubled each year between 2003 and 2012. By 2003, improved reporting was already in effect and wouldn’t contribute to the increases during those years.

Given these numbers, utilities are looking for ways to keep equipment dry and safe. “Some coastal utilities, such as Con Ed, are building dams and walls to protect substations against storm surge. Others, such as Centerpoint Energy, are raising transformers, control houses and other major substation components above the flood plain,” noted a 2017 T&D World article.

Even if weather patterns weren’t changing, run-off likely is. That means planning for 100-year or 500-year flood events may take some rethinking, as many flood studies could now be outdated, Dickerson notes. He adds: “There is a much more impervious landmass now – parking lots, buildings and so forth. We really need to re-do some of the studies in light of the present situation.”

Here’s another thing utilities are rethinking: what it means to create a resilient system in the first place.

Rather than making restoration of service the primary objective, Dickerman says restoration of key services that are most essential to alleviate suffering may be the way to go.

“That will lead you to some different conclusions,” he continues. “Maybe the best measure of restoration success is how quickly you get water restored to everybody that needs it or how quickly you restore a place for people to buy liquid fuels for vehicles and backup generators. Maybe you look at how quickly people can buy groceries or get medical services they need.”

An article in Utility Dive had this to say about preparing for catastrophic storms: “For all the talk of grid hardening and resiliency, keeping the lights on in a major hurricane — Category 3, 4 or 5 — may just be impossible. The triple-digit wind speeds are more than most infrastructure can handle, and debris and flooding are lethal for an electric grid. But utility efforts are paying dividends — on the recovery side.”

Strategies to create grids that leverage automated restoration technologies are particularly effective. Here is more information on the self-healing grid.