Honk if you like cleaner air and more mobility for low-income residents. You won’t be honking alone. Those goals are common themes among smart-city transportation projects. Here is a quick look at some ideas in the works.

After the U.S. Department of Transportation decided to jumpstart smart-city projects through a contest launched in December 2015, 78 cities vied for victory. Columbus won the DOT competition, and helping the poor was a major part of their winning pitch.

Early on, Columbus is looking at creating transit cards that offer a common payment system for public transit, as well as ride-sharing services or car- and bike-sharing programs. That will help cash-based households that lack credit cards or bank accounts use something like Uber or Lyft. It will also help residents in underserved areas with first-mile, last-mile access to public transportation.

Denver has a similar vision. It wants to deploy a first-mile, last-mile subsidy program for some of its poorest neighborhoods by offering ride-sharing drivers guaranteed fares and price discounts for passengers with trips that begin or end at a transit stop or station.

That’s good news, because DOT found that public transit was a disheartening slog for city residents in most of the cities that participated in the Smart City Challenge. Only 27 percent of city residents could use public transportation to get to jobs in fewer than 90 minutes. 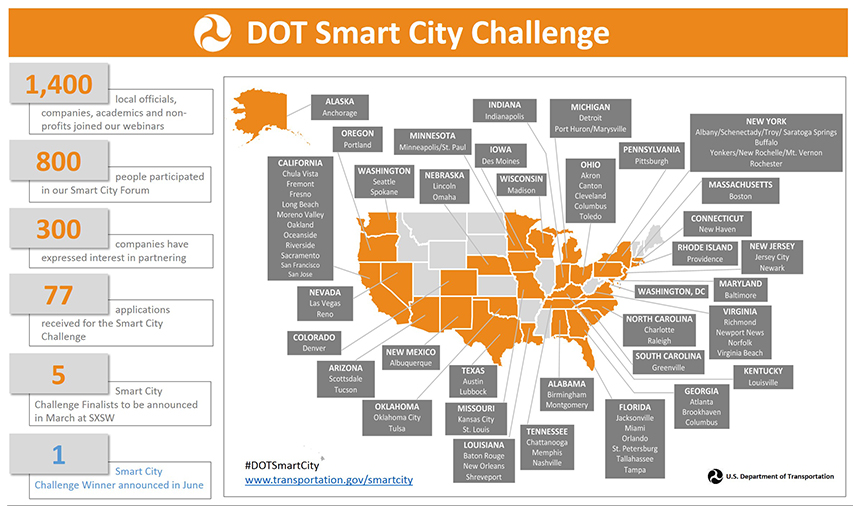 Several of the cities participating in the DOT contest envisioned electrifying all city buses and municipal vehicles. Seventeen cities proposed inductive wireless charging stations to charge electric vehicles, and many also proposed installation of plug-in charging stations. At the time, Denver led the pack with a plan to deploy 120 stations around town.

The utility has deployed more than 350 charging ports and created a “plug-in-everywhere” program that uses wind power and costs customers only $4.17 per month for access to any of the city’s charging infrastructure.

DOT’s Smart City Challenge ended in June 2016, and Austin Energy already has Denver beat.  The utility has deployed more than 350 charging ports and created a “plug-in-everywhere” program that uses wind power and costs customers only $4.17 per month for access to any of the city’s charging infrastructure.

That program is included in the utility’s new EV360 rate plan, which lets EV drivers have unlimited off-peak charging for as little as $30 month after paying a one-time enrollment fee.

Cities aren’t the only ones looking for more efficient transportation options. A Brooklyn-based start-up called Bandwagon has created an app that lets people standing in taxi queues at local airports jump out of line and share a taxi with a stranger headed the same way.

Riders post their destination and if another rider is going to a location nearby, the two pay $5 to Bandwagon and then split the taxi fare. The program works with existing licensed cabbies, so those who don’t like the idea of traveling with unlicensed Uber or Lyft drivers can still participate in the sharing economy. According to Bandwagon officials, most riders save around 30 percent on their cab fares with the app.